From the New Jersey Institute of Technology newsroom ...

Groundbreaking images of the Sun captured by scientists at NJIT’s Big Bear Solar Observatory (BBSO) give a first-ever detailed view of the interior structure of umbrae – the dark patches in the center of sunspots – revealing dynamic magnetic fields responsible for the plumes of plasma that emerge as bright dots interrupting their darkness. Their research is being presented this week at the first Triennial Earth-Sun Summit meeting between the American Astronomical Society’s Solar Physics Division and the American Geophysical Union’s Space Physics and Aeronomy section in Indianapolis, Ind. 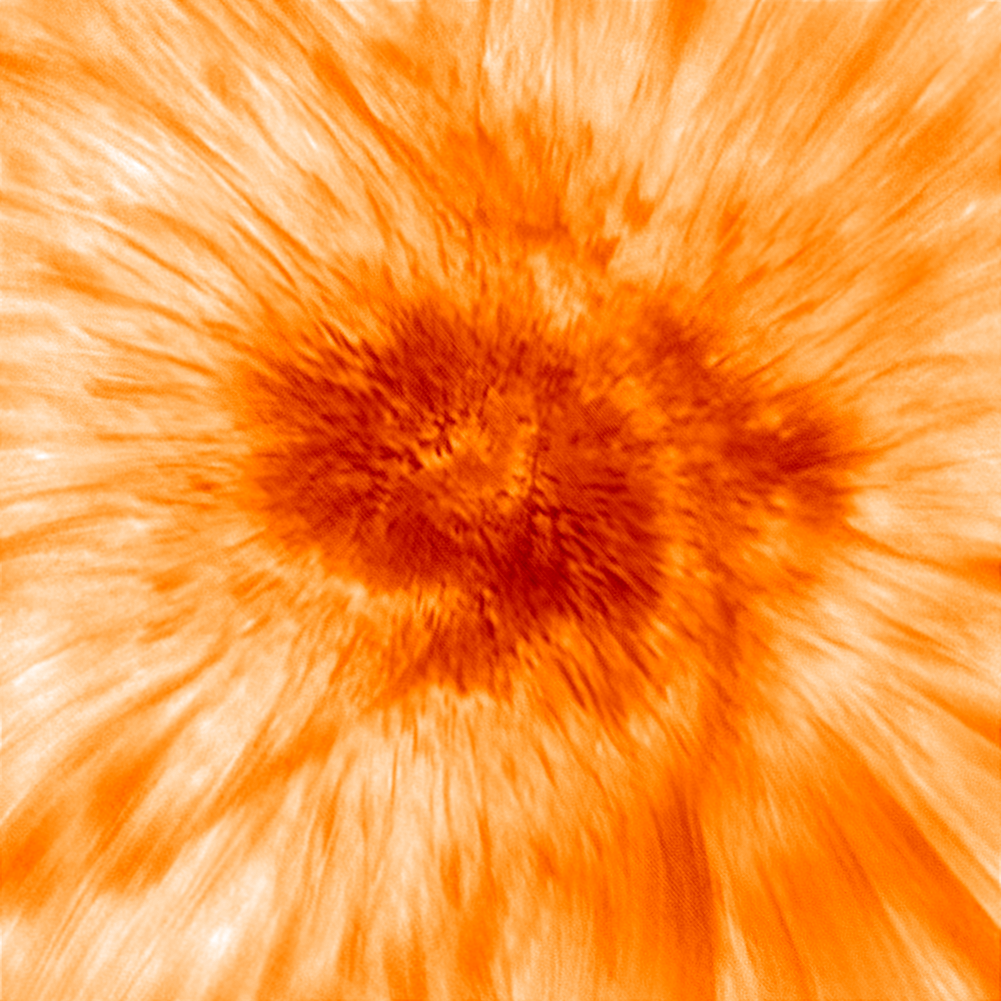 The high-resolution images, taken through the observatory’s New Solar Telescope (NST), show the atmosphere above the umbrae to be finely structured, consisting of hot plasma intermixed with cool plasma jets as wide as 100 kilometers.
“We would describe these plasma flows as oscillating cool jets piercing the hot atmosphere. Until now, we didn’t know they existed.  While we have known for a long time that sunspots oscillate – moderate resolution telescopes show us dark shadows, or penumbral waves, moving across the umbra toward the edge of a sunspot – we can now begin to understand the underlying dynamics,” said Vasyl Yurchyshyn, a research professor of physics at NJIT and the lead author of two recent journal articles based on the NST observations.

Called spikes, the oscillating jets result from the penetration of magnetic and plasma waves from the Sun’s photosphere – the light-giving layer of its atmosphere – into the abutting chromosphere, which they reach by traveling outward along magnetic tubes that serve as energy conduits.  “This process can be likened to a blowhole at a rocky beach, where relentless onshore waves jet sea water high into the air,” Yurchyshyn said.

Sunspots are formed when strong magnetic fields rise up from the convection zone, a region beneath the photosphere that transfers energy from the interior of the Sun to its surface. At the surface, the magnetic fields concentrate into bundles, which prevent the hot rising plasma from reaching the surface. This energy deficit causes the magnetic bundles to cool down to temperatures about 1,000 degrees lower than their surroundings. They therefore appear darker against the hotter, brighter background.

“But the magnetic field is not a monolith and there are openings in the umbra from which plasma bursts out as lava does from a volcano’s side vents. These plumes create the bright, nearly circular patches we call umbral dots,” Yurchyshyn noted. “Sunspots that are very dark have strong magnetic fields and thus fewer openings.”

Compact groups of fast-changing sunspots create tension in their magnetic systems, which at some point erupt to relieve the stress. It is those eruptions that cause intense “space weather” events in the Earth’s magnetosphere affecting communications, power lines, and navigation systems.

“We had no sense of what happens inside an umbra until we were able to see it in the high-resolution images obtained with the world’s largest solar telescope. These data revealed to us unprecedented details of small-scale dynamics that appear to be similar in nature to what we see in other parts of the Sun,” Yurchyshyn said. “There is growing evidence that these dynamic events are responsible for the heating of coronal loops, seen in ultraviolet images as bright magnetic structures that jet out from the Sun’s surface. This is a solar puzzle we have yet to solve.”

Since it began operating in 2009, Big Bear’s NST has given scientists a closer look at sunspot umbrae, among other solar regions. It has also allowed them to measure the shape of chromospheric spectral lines, enabling scientists to probe solar conditions.

“These measurements tell us about the speed, temperature, and pressure of the plasma elements we are observing, as well as the strength and the direction of the solar magnetic fields,” said Yurchyshyn, who is also a distinguished scholar at the Korea Astronomy and Space Science Institute. “Thus we were able to find that spikes, or oscillating jets, are caused by chromospheric shocks, which are abrupt fluctuations in the magnetic field and plasma that constantly push plasma up along nearly the same magnetic channels.”

The study on umbral spikes was published in the Astrophysical Journal in 2014.

In a second paper published in the Astrophysical Journal in 2015, he is presenting another set of NST observations, taking a closer look at the sunspot oscillations that occur every three minutes and are thought to produce bright umbral flashes - emissions of plasma heated by shock waves.

The NST takes snapshots of the Sun every 10 seconds, which are then strung together as a video to reveal fast-evolving small explosions, plasma flows and the movement of magnetic fields. “We were able to obtain photographs of these flashes of unique clarity that allowed us to follow their development inside the umbra,” he said. Previously believed to be diffuse patches randomly distributed over the umbra, the researchers found their location is in fact not random. They mainly form along so-called sunspot umbral light bridges, which are very large openings in the sunspot magnetic fields that often split an umbra into two or more parts.

“Even more importantly, we found that umbral flash lanes tend to appear on the side of light bridges that face the center of the sunspot,” he added. “This finding is significant because it indicates that sunspot oscillations may be driven by one energy source located under the umbra. There are simulations that appear to reproduce what we have observed, which is very encouraging. We, as a community, are finally in the position to be able to directly compare the observations and the state-of-the-art simulation results, which is the key to making further progress in our field.”